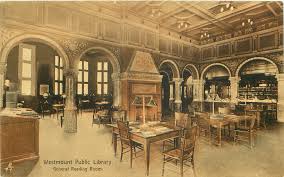 The opening of Westmount Public Library in 1899 highlighted the great importance residents attached to reading and higher education. Architect Robert Findlay was responsible for the library’s first three phases—the initial building, the Children’s Library of 1911, and the 1924 south reading room with mezzanine. They were built in the Victorian and Edwardian periods and responded to the needs and the taste of the time. There were separate reading rooms for men and women and a children’s library housed in its own building. The interiors featured coffered wooden ceilings, high walls divided horizontally into sections, marbleized columns, leaded-glass windows, and functioning fireplaces. 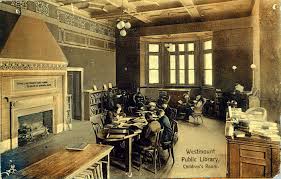 Over the years, additions and changes were made by other architects. However, what remains today is Findlay’s design with a major extension by architect Peter Rose, built in 1995 at the rear. In the same year, the Findlay library underwent a major restoration to mark its 100th anniversary. The architecture firm of Gersovitz & Moss was responsible for the interior decoration and furnishing of the Findlay wing. Original elements were restored, while a lighter colour palette than that of the previous century was used. A sole fireplace remains in the Westmount Room (formerly the children’s library) and bears a stone inscription and tiles of scenes from Alice in Wonderland by Lewis Carroll. 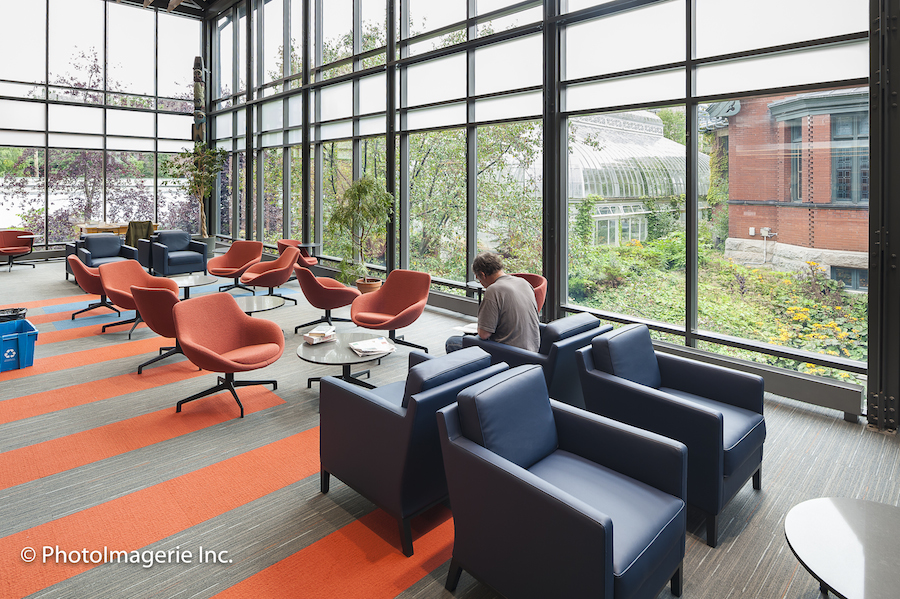 Today the children’s library is located in the modern addition by Peter Rose. The Rose wing is accessed by the 1995 entrance facing Sherbrooke Street, with a windowed passageway extending to the back. Facing the greenhouse is a light-filled two-storey space in the reference section.
Since the 1995 addition, Westmount Public Library has offered far more than reading facilities. It now provides audio-visual and computer services, as well as a special area for teens. The Westmount Room has become a cultural hub of the community, with activities such as book club meetings, film screenings, and meetings, including the lectures of the Westmount Historical Association.
In August, the interior of Westmount Public Library underwent the first major refurbishment since 1995. The highly-trafficked carpets were replaced. The area in the reference section, previously used for study, was reconfigured as a comfortable reading area, overlooked by the mezzanine above. Over more than a century, our library has changed to meet the needs of its users, while retaining its unique heritage cachet. The outstanding interior design by the various architects, and input by Westmount City Council, library staff, and residents have played an important part in this process.