The Westmount Historical Association, a volunteer organization founded in 1944, has the following mission: 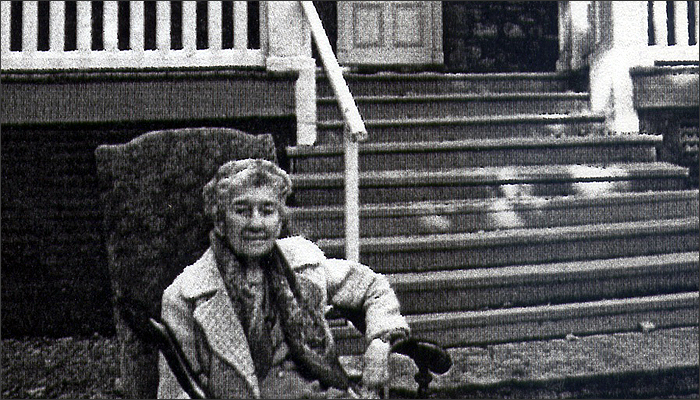 Alice Lighthall in front of the Hurtubise House

The WHA was founded on February 24, 1944 at a meeting of the Westmount Municipal Association. Among those who became involved at that time was Miss Alice Lighthall, a well-known local historian and community activist who recognized the merits of encouraging public awareness of the community’s history, and particularly its social and cultural development. Over the next four decades, meetings, discussions, and exhibitions were organized, and maps, photos, and documents were collected for an archives. These early attempts at collection and conservation were the genesis of the WHA archives, which has grown and developed over the years.

During the 1940s, Miss Lighthall began writing historical articles for the local newspaper—an activity she pursued until the mid-1980’s. More recently, beginning in the mid-1990s, articles appeared by former WHA presidents Aline Gubbay and Doreen Lindsay, and more recently were being written for the local papers by president Caroline Breslaw. In the 1950s, it was through the efforts of Miss Lighthall that Westmount’s oldest existing dwelling, the Hurtubise house at 563 Côte St. Antoine Road, was saved from potential demolition and purchased by a private foundation dedicated to its historic preservation. 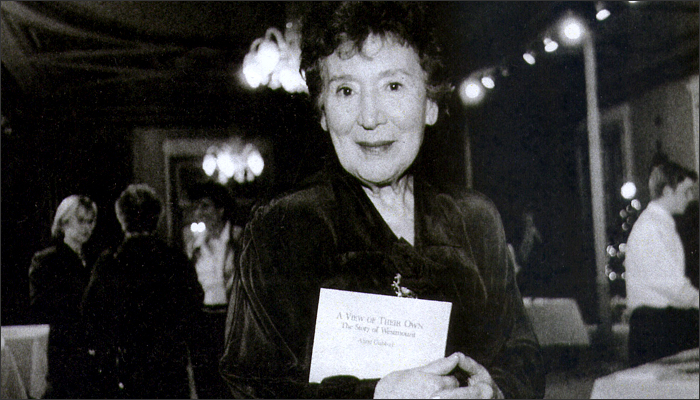 Aline Gubbay at the launching of her book A View of Their Own, 1998

Under the guidance of historian Aline Gubbay, the WHA was revitalized in 1994 and obtained accreditation as a Quebec registered charitable organization. A lecture series was launched, with invited speakers who are specialists in their fields. This initiative continues to be a major activity of the WHA today. About the same time, the association’s informative newsletter, the Westmount Historian, began publication and continues to appear twice yearly.

Until the renovation of the Westmount Public Library in 1994-95, the WHA enjoyed the use of the Library’s tower room for its office. In 1998, the City of Westmount lent its support by providing space in the Library’s basement to serve as the Association’s office and archival storage space, where a growing collection of documents, photographs and memorabilia continues to be housed. The Archives was subsequently named the Hélène Saly Heritage Collection in honour of the late Dr. Hélène Saly, who managed the archives during their initial development and made an extraordinary contribution to our knowledge of Westmount history.

The past decade or more has seen surging interest in local community history, and particularly in a growing awareness of Westmount’s rich and diverse architectural heritage. As a natural outgrowth of its focus on local history, the WHA has expanded its original mandate to include new types of initiatives, both on its own and in collaboration with the various City departments, to enhance knowledge and appreciation of our architectural heritage and to advocate architectural preservation.

Notable examples of this type of initiative were the 2005 guided walking tour of Côte St. Antoine Road, and the 2006 lecture series on iconic Westmount architect Robert Findlay, which was followed up by a local walking tour of Findlay-designed homes. In partnership with Westmount’s Urban Planning Department, the WHA plans and implements walking tours as part of l’Opération patrimoine architectural de Montréal (Montreal Architectural Heritage Campaign).

At the end of 2010, the WHA undertook to present a detailed study and recommendations for the design and installation of what would be Westmount’s first significant historical marker, to be located in Westmount Glen. With the cooperation of the City of Westmount, the WHA carried out the project, including preparation of a bilingual text, design and fabrication of the plaque, as well as the acquisition and placement of a suitable boulder for mounting. The Glen Plaque was officially unveiled by Mayor Peter Trent on Wednesday, Nov. 21, 2012, in a ceremony presided over by the WHA organizing committee, and attended by council members and other public officials, as well as members of the community.