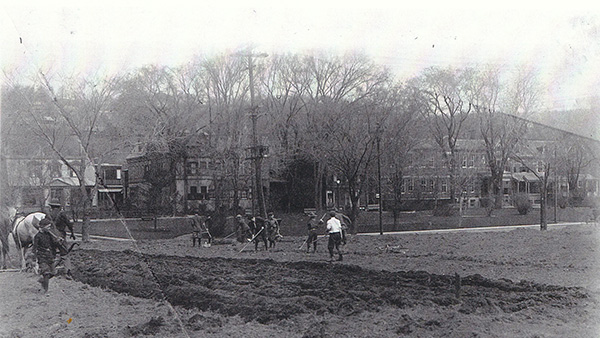 The recently renamed Vimy Park, the triangular greenspace to the east of Westmount City Hall, was originally part of the once vast Decarie farm, granted to the family by the Sulpicians.  It was overlooked by a huge elm tree and was said to be a meeting place for Amerindians.  In the 1850s, when the Grey Nuns were planning to build their motherhouse in Westmount, they acquired this segment. The motherhouse never materialised, and the land continued to be cultivated by various owners. A photo from c.1900 shows it being ploughed. 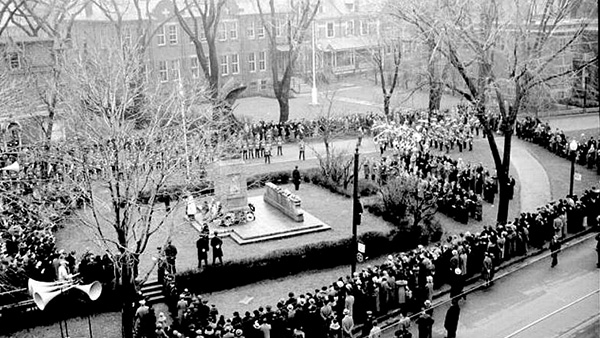 The irregular point shape was created in 1893 when Sherbrooke Street was extended west to intersect Cote Saint-Antoine Road. This lot was purchased by the City in 1911 from a Judge Ouimet and was given the name Garden Point.  The cornerstone for a war memorial, to commemorate soldiers from Westmount who had died during World War I, was laid in 1920.  In 1922, Westmount City Hall was built facing it to the west, and the cenotaph was unveiled.  Designed by the prominent sculptor George Hill, it features the bronze figures of a soldier and a guardian angel, with marble reliefs of women in wartime below.  In 1948, local architect Percy Erskine Nobbs designed an elevated platform, added granite tablets with the names of Westmount’s fallen military personnel from the Second World War, and planned the landscaping of Garden Point.

At the April 3, 2017 meeting of Westmount City Council, Garden Point was renamed Vimy Park, in honour of Canada’s WWI victory at Vimy Ridge. The grassy expanse of Vimy Park will be landscaped to provide a place for quiet contemplation. 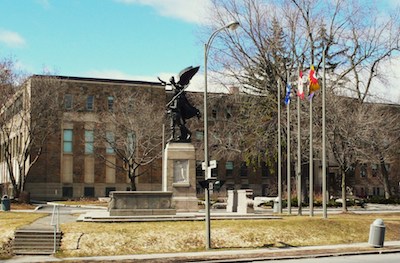