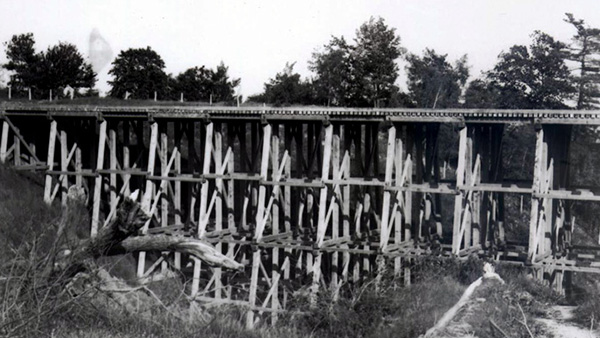 On March 6, 2017, the Glen Viaduct, also known as the Glen Arch, was officially designated a heritage site by Westmount City Council.  This marked the culmination of a long process of recognising the importance of this landmark in our municipality.  The steep valley with a stream was called the Glen by the early Scottish residents.  The CPR built a wooden trestle bridge over it in 1888, in order to extend train service westwards.  Three years later, the Town of Westmount paid for the construction of a stone viaduct to replace this wooden structure.  In exchange, Westmount was granted the right to build a road under it with the Glen stream channelled beneath the road. This was Westmount’s first major public works project.  The stone arch, built of Trenton limestone in the Richardsonian Romanesque style, was widened in 1918-1919 by CPR, so that the rails could be tripled. Walking through the arch, you can see the join of the two sections.

The Glen valley has been a transportation route from the days of the Amerindians–for walkers, streetcars, buses, cars, and cyclists—connecting Westmount to St. Henri. The Glen Viaduct acts as a southern gateway to Westmount.  It provides a scenic view up the hill, with green embankments on all sides, a reminder of the picturesque ambience of the valley as it once was.

In 2012 the Westmount Historical Association placed a heritage plaque on the hillside near the Arch to record the importance of the site.  The recent designation under Quebec Bill 82 by the Local Heritage Council is the first in a series intended to protect our local heritage.